Well I did it. I made my own pattern. I was inspired when I made a Kittyville hat for my nephew. I altered the Kittyville pattern by using a 2x2 rib at the bottom instead of a seed stitch. The hat was black and yellow and was intended to look like Batman. The ribbing reminded me of the yellow paper that you put cupcakes into when you bake them. So I came up with this hat. 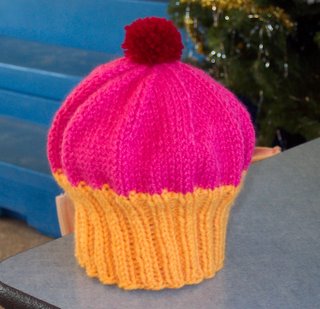 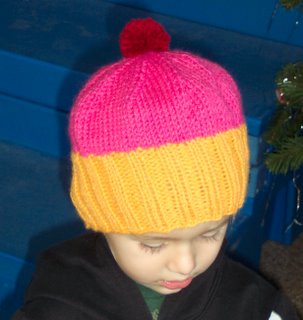 Here's the pattern for a three year old hat. Enjoy!

Cast on 80 stitches with the yellow yarn.

Change to pink yarn work *Knit 3, Knit one into front and back* for entire round, ending with 100 stitches.Work until piece measures 5 inches from cast on edge.

Then you start the decreases.

Break yarn, draw yarn through remaining stiches and secure inside hat. Make a red pompom and attach to top of hat. Ding! The cupcake hat is done!

Hi,
There is a site with the Cupcake hat on it. It's a bit different than your's. Maybe you could take a look.
I also made one for my 4-year old granddaughter, she just loves hats.
Here is my link if you'd like to view it.

There is a site that has a cupcake hat pattern. It's a bit different than your's.

I also made one for my 4 year old granddaughter. She loves hats!

You can view it in my photo album below: Then click onto hats-
http://photobucket.com/albums/a187/patti819/

what a fun hat I will have to give this one a go :)

thanks for the pattern! just made two hats for my nieces. very easy pattern to use. loved it.

Love it!! I used white for the "paper cup" and light pink for the "frosting". I also added pink beads and sequins like sprinkles!! Super cute! I'm gonna make tons of these!

Wow this is my first real project I have only done scarves, potholders, etc. But I am very pleased by how well it turned out
thanks:)

I love this hat! I've seenanother but it didn't look like what I visualize as a kid's cupcake - it didn't have the paper cup, nor did I like the top. I was goingto try my hand at designing, but you beat me to it. I thank you for it. My granddaughters will like them. Thanks!!!
JudiRose

What IS your background?
It looks like one of my sister's lithographs.

I LOVE this! Any chance someone can tell me how to make it in an adult size? My daughter-in-law is in the cupcake business in Maine - how PERFECT would this be for her?
Thanks!
Deb

how many stitches do I need for ladies size

@ Margaret, the background was a choice from Blogger when I updated it.

@Anonymous- I would cast on 100 and work as written, but do the frost for at least 7 inches before starting decreases. If you want poofiness at the start of the frosting, you could pick up around the color change and crochet a little ruffle on the edge.

The only label I have is "free pattern."